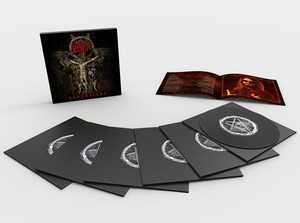 Two-time Grammy winning Slayer have been described as “one of the great American rock bands of the last 30 years”. Their membership of “The Big Four” – Metallica, Slayer, Megadeth and Anthrax – the four bands that defined the thrash metal genre – secures their place in music history. Indeed, few bands come close to matching the intensity that Slayer brings to it’s live shows. With songs that mirror the turmoil and aberrations of our society – God’s terrifying global genocide, the chaos of our broken political system, the hideous minds of serial killers, Slayer remain crushing and brutal, steadfastly refusing to cater to the mainstream. Slayer’s founding member Jeff Hanneman passed in 2013 and Exodus guitarist Gary Holt has been filling in since. Paul Bostaph , who was Slayer’s drummer from 1994 – 2001, has rejoined bassist/vocalist Tom Araya and guitarist Kerry King, and is back behind the kit.

Repentless (originally released in 2015) was SLAYER’s first new studio album since 2009’s critically-acclaimed, Grammy-nominated World Painted Blood. The twelve songs were produced by Terry Date and recorded between August 2014 and mid-January 2015 at Henson Studios in Los Angeles. The band‘s rabid fans had already had a taste of what‘s to come via the frenetic ‚Implode‘ (offered in it‘s demo form as a free download) and the limited Record Store Day release of the haunting ‚When The Stillness Comes‘, which sold-out in a matter of hours. However, the album‘s centrepiece is the title track. “’Repentless’ is my Jeff tribute,“ says Kerry King. “I call it the ‘HannemAnthem.’ It’s my perspective of Jeff’s perspective, it’s what I think…if Jeff wrote a song for himself “Repentless“ would be it.“

A major UK tour,with fellow thrash stalwarts Anthrax followed leading into a headline slot at Bloodstock 2016, saw Slayer reclaim their Metal throne.However, the band recently announced a worldwide farewell tour as they intend to retire from playing live. And what better way to bask in the band’s Metal glory with the World’s first-ever 6.66” vinyl box set released on June 6th.